Call our 24/7 advice line for health care professionals and families if you need support with symptom management and end of life care - 01284 766133.

If you have used our Hospice's services, please consider taking some time to inform us of your experience.

Patricia, who was nominated in the Good Neighbour Award Category, was announced as runner-up at the ceremony on Thursday 28 July 2016. The awards, organised by the Community Foundation, recognise outstanding contributions made by staff from public sector organisations and members of the community, like Patricia, whose efforts have made a positive difference in the community as well as inspiring and motivating others.

Patricia volunteers at the Hospice, as a Receptionist on Sylvan Ward, and as a Hospice Neighbours volunteer and Co-ordinator. 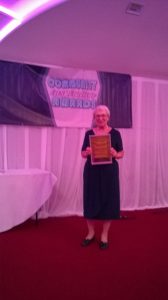