What a beautiful spring we are having this year! The weather is perfect for early treasures in the garden. There are so many flowers to enjoy – delights that disappear before the open garden season gets under way.

Here are some my favourites in our garden now.

Tiny early iris. This beautiful blue one with prominent yellow falls spreading to attract pollinators, is Iris reticulata ‘J.S. Dijt’. It’s been in the garden for around ten years and has survived being moved twice. The flowers come before the long, slim leaves, which need to be left to die down naturally to feed the bulb for next year’s show. 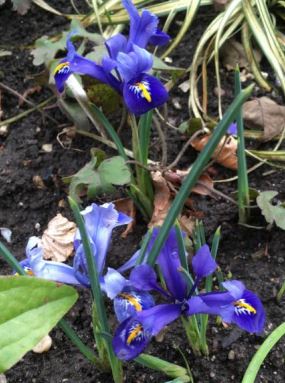 Nearby, flowering at the same time, is the tiny Narcissus cyclaminaeus, holding its head down and its petals back – like a cyclamen. 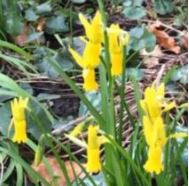 Taking the chance to flower in the spring sunshine before nearby trees start to leaf up in late April, is the jolly little ‘Tulip Little Beauty’.

Beneath the Japanese maple grow Fritillaria meliagris, the snakes head fritillary. ‘Meliagris’ refers to the markings which resemble the freckled plumage of the guinea fowl; a delicate yellow/orange species tulip; white flowered Erythronium ‘White Beauty’; and the blue flowers of Brunnera ‘Jack Frost’ which keeps its silvery grey-green leaves, lighting the dark area below trees, through ’til late autumn.

There has been, in the colder days, the early white blossom of the Greengage, the Doyenne du Commice pear and the white-pink flowers of the James Grieve apple, all of which were here before we came 34 years ago. It is always touch and go hoping that the pollinators have done their job and the fruit will come later in summer. The walnut tree is leafing up and already thick with the fat catkins that not only drop in thick coats over lawn and flower beds, but speak of walnuts to come. 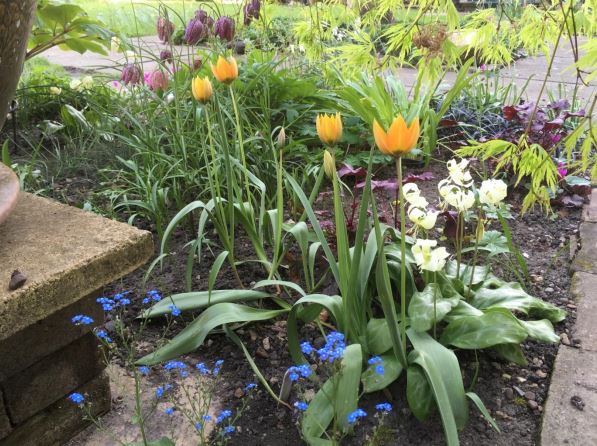 One anticipated display of new leaves gave us concern this year. Our beautiful Japanese maple, Osakazuki, has died. I believe it suffered from two very hot, dry summers and, being shallow rooted and by a high wall, just didn’t get enough water. We shall miss its wonderful autumn colours and the red leaves fallen to the ground.

Right now we are enjoying the tall blue iris, which turns an amazing irridecent blue-purple in the early evening light. Also, the yellow peony, Paeonia Mlokosewitschi, more easily for us called ‘Molly the Witch’. Our plant was grown from seed by Suffolk Plant Heritage and, true to form for paeonies, began flowering when it was five years old! It is now seven years old and has eight lemon yellow bowl shaped flowers four inches across, floating above huge soft blue-green leaves that will last into the autumn, though the flowers themselves will be gone very soon. 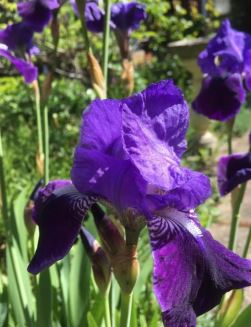 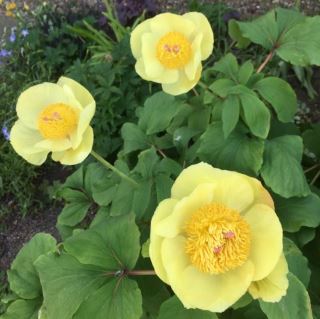 Some of the early, long-lasting, clematis with their soft, nodding bells that open with direct sunshine, are gracing old walls, and tiny Tulipa batalinii ‘Bright Gem’, with grey-green leaves, is doing well in its first year in our garden. 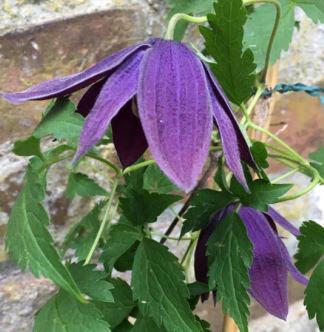 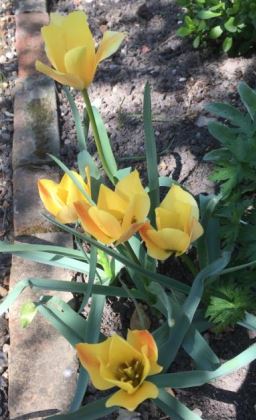 Later there will be roses and more of our 41 clematis…but that will be another story.