A business-minded ten-year-old’s generous gesture has led to a funding boost for the charity which cared for his dad.

Having been given a £5 note Harley, along with his classmates was given the challenge of turning it into as much as he could, which resulted in a £100.80 donation to St Nicholas Hospice Care.

To help him raise the funds, Harley, decided he would raffle squares, with each been sold for £1, and he had three weeks and 200 squares to sell.

With the person who picked the winning square receiving half of the prize money £100, Harley was allowed to keep the remaining profit as a prize, but instead he decided to donate it to the Hospice.

Harley said: “It was a lot of fun. When I first said my idea people said I wouldn’t raise any money but I did the most in the class. I sold all of the tickets, De Jay my brother said he would buy the last ones, but I had already sold them.

“I really enjoyed it and raising money was good too. The hospice needs £11,000 a day to be able to help people.”

Harley decided to donate his winnings to the Hospice because they looked after his dad Darren before he passed away  eight-years-ago.

Harley’s mum Kelly Brinkley said: “I am very proud of Harley, we all are. He did so well and I was so proud when he said he wanted to give the money to the Hospice.

“Darren spent his last 30 hours in the care of the Hospice, and I just can’t praise the care he received enough. The nurses were brilliant and afterwards we were really supported as a family, with Georgia (Harley’s sister) and Harley both receiving support from the hospice’s Nicky’s Way.”

Miranda McCoy, Hospice Community Fundraiser, said: “A huge well done to Harley, we are all so grateful for his generous gesture which will help the hospice as it continues to look after those who need our help.

“Thank you to Harley and everyone who supported him – his wonderful family and all those who helped him by buying squares.” 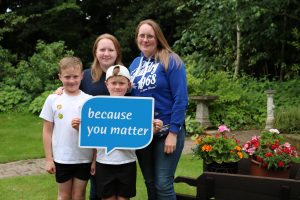